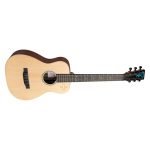 Inspired signature model with quality tonewood marriage and artwork from the album and artist whose names it bears.

From budding YouTube discovery to international pop sensation, Ed Sheeran is one of the most recognizable male artists in the music industry. Immediately recognizable with his freewheeling red bedhead, you’ll also rarely ever see him without a guitar in his hands, most notably his Martin Guitar Ed Sheeran X Signature Edition (with its X art to reflect his second album) or his Martin X Series LX1E Little Martin (with a + symbol on it as an ode to his first release).

After a year-long creative hiatus, the multiple Grammy Award-winning singer-songwriter came back with a vengeance in 2017 with his third album, Divide, which topped the charts in 14 countries, including his first home, the UK, and his new home, the United States. Coinciding with this successful artist’s latest effort, Martin and Sheeran have collaborated once again with the aptly named Ed Sheeran Divide (or ÷)  Signature Edition. This third collaboration is built upon Ed’s love of the LX1E Little Martin, and continuing with his mathematical themed album cover art. It completes the Ed Sheeran 3 trilogy of Martin Signature guitars that have supported Sheeran along his soaring career path to super stardom.

The Ed Sheeran 3 Divide Signature Edition features a solid Sitka spruce top etched with Sheeran’s album art and a blue soundhole rosette to match. The body is constructed with mahogany HPL back and sides to produce a nice, big sound, and sports blue ÷ symbols across the fingerboard and headstock. Fishman Sonitone electronics let you take the stage with confidence much like the man it’s named after. Each Divide model is equipped with a Custom interior label and comes with a gig bag.