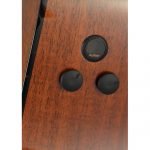 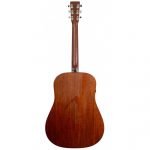 C. F. Martin & Co. is inviting musicians to take a trip back in time with the introduction of a groundbreaking guitar technology available in the new four-piece Retro Series: D-18E, D-45E, HD-28E, and OM-28E. Paying homage stylistically and sonically to the iconic classic Martin guitars of the 1930s and ’40s, this series features traditional non-cutaway Martin guitars incorporating significant advancements in plugged-in sound reproduction. The series exquisitely captures a sought-after sound, melding traditional models with state-of-the-art technology, and will appeal to musicians and guitar aficionados alike.

Martin designers dove back into the rich history residing in the Martin museum and chose world-class examples to use as “tone donors.” These guitars include a 1942 D-45, a 1941 D-28, a 1937 D-18 and a 1934 000-28 (long-scale) on loan from Vintage Instruments. Each of these guitars possesses unique tonal characteristics that can be attributed to the passing of time. The premise was to convince the new guitars into electronically behaving as if they were the museum guitars.

Developing the new Retro Series electronic foundation, Fishman electronically infused the essence of the museum instruments into the newly created Martin counterparts, a new technology for both companies. To build upon this “vintage-conditioned” sound, Martin Guitar teamed up with Fishman and Grammy Award-winning producer Bill VornDick at his historic Mountainside Studios in Nashville for a multi-step process. They utilized VornDick’s private collection of rare vintage and boutique microphones, many of which date back to the ’30s and are iconic recording industry microphones. This collection adds unique coloring to the plugged-in sound, reminiscent of the first microphones these museum guitars would have ever encountered in the professional recording studio.

The Retro series instruments are vintage in appearance but will have enhanced playability including a modern “High Performance Neck” taper and modified low oval profile. They will all have the new Fishman F1 Aura + electronics system featuring “Easy Mode” with three pre-blended mic/pickup presets and all of the programmability and tweakability of the original F1 Aura in “Performance Mode. ”

Great for studio or live, this series reproduces the pristine sound that until now could only be accomplished in a highly-controlled studio setting with talented engineers.

VornDick said it best after hearing the finished product, “The plugged-in sound of these instruments is by far, the best reproduced acoustic sound I’ve ever heard.”