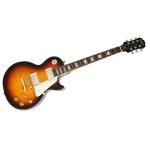 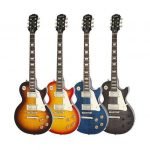 The Ultra-III – Where Tradition Meets Technology
We all know that deep down, most guitarists love the classic designs and shapes. That’s why Epiphone designed the new Les Paul Ultra-III with the same look and features of a traditional Les Paul but added new technology giving you a guitar that’s a real Les Paul but also so much more!Two Great Pickup Systems in One Guitar
At the heart of the new Ultra-III are two pickup systems. Powering the first are Epiphone’s new ProBucker humbucking pickups patterned after Gibson’s famous BurstBuckers. With authentic 18% nickel silver base and cover, Elektrisola wire, accurate bobbins, slugs and screws and sand casted Alnico-II magnets, they replicate that classic “Patent Applied For” airy tone that defined rock and roll. The second system features Shadow(tm) Germany’s patented NanoMag pickup embedded discretely at the end of the fingerboard. Featuring three samarium cobalt magnets, an air coil, and active electronics, this low-impedance pickup captures all the subtle body acoustics and string harmonics. Together, you get powerful humbucker-driven rock crunch as well as shimmering acoustic-like tones and everything in-between.

One-Of-A-Kind Electrics Built-in
If you thought the Ultra-II was jam-packed with modern features, you won’t believe what Epiphone has designed into the Ultra-III. Built discretely into the bridge pickup mounting ring is a full-function, chromatic tuner. Push it’s ON/OFF button and sound is immediately muted when the tuner activated. Eleven color-coded LED’s identify the note as well as whether it’s sharp, flat or in-tune. Also, to allow quick and seamless changes between each pickup system, the Ultra-III’s NanoMag Volume knob now doubles as an A/B switch. Just push it in and quickly toggle between Magnetic, NanoMag or both pickup systems with no delay and no “pop.” Two additional LED’s on the pickup mounting ring provide a visual indicator of which pickup system is active (Red=NanoMag; Blue-Magnetic or Red/Blue=Both).

Hook-Up Directly To Your Computer
The Ultra-III features three different outputs. By using the standard 1/4″ MONO output, both the Humbuckers and NanoMag are mixed into one signal. When you plug another 1/4″ cable into it’s STEREO output, the Humbuckers are routed through one cable and the NanaMag the other. In this way, you can send the Humbuckers to your favorite guitar amp and the NanoMag to the PA or an acoustic guitar amp. Using the A/B switch, you can now change “on-the-fly” between the two outputs. The third output is USB. Using a USB cable (included), you can plug directly into your computer and use guitar applications such as Native Instruments GuitarRig 4LE download to play your guitar through a variety of simulated amplifiers and effects and listen through your computer speakers or headphones. GuitarRig also features a recorder, a metronome, a tuner and more.

Great Tone Woods and Hardware
While the Ultra-III is packed with technology, it still maintains the same basic specifications that made Epiphone Les Pauls the choice of so many guitarists including a solid Mahogany body with glued-in Mahogany neck and comfortable SlimTaper neck profile, a flame Maple veneer top and Rosewood fingerboard. The result is a modern guitar with that classic Les Paul tone and sustain. Like most Epiphone’s, it’s also equipped with Epi’s patent-applied-for LockTone locking tune-o-matic bridge and stopbar tailpiece for increased sustain and string changing ease as well as quality Grover 16:1 machine heads for tuning accuracy and stability.