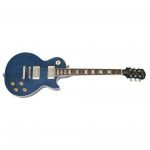 Les Paul Tribute Plus
Epiphone’s long friendship with innovator Les Paul dates back to the late ’30s and early ’40s when Les and fellow guitarists such as Charlie Christian and George Barnes were at the forefront of jazz guitar. Epi Stathopoulos and Les were good friends and Epi would let Les use the Epiphone factory on 14th Street in New York City at night after hours to experiment on guitar and pickup designs. This also was the era when Les, inspired by the stinging sustain heard in electric steel guitars, began dreaming of making a solidbody guitar. He built his first, the legendary “Log,” at the Epi factory in 1941. Over the years, Les continued to work closely with Epiphone luthiers, reviewing new product ideas and offering suggestions. Now, the Epiphone Les Paul Tribute Plus honors our friendship with Les by combining his classic design features with legendary Epiphone quality and value with the added power of Gibson USA ’57 Classic humbuckers.